Ho Chi Minh City, or Saigon (local-preferred name) is located in the center of Southeast Vietnam geography zone. The metropolitan area has about 12 million people, making it the most populous metropolitan area in Vietnam. Because of its location in the south, Saigon normally has a cooler and less humid temperature compared to the capital city, Hanoi.

I took a flight from Jakarta to Kuala Lumpur before flying to Saigon with AirAsia. There are also some direct flights with Garuda Indonesia or Vietnam Airlines, but they are more expensive. My round trip non-direct tickets cost around USD 150. Round trip direct tickets could easily start from USD 400.

It kinda felt like I was this crazy rich Asian in Saigon. Food was cheap, my hotel was cheap, and Grab (a service like Uber) was extremely cheap.  For a quick 10-minute ride, it was usually around USD 1 or USD 2. I didn’t get a chance to take a motorbike and public buses, but they were even cheaper.

Just to give you an idea of what life was like, an average cost for a meal with a drink is USD 3. That is even sometimes considered expensive, and you can easily find something for less. I stayed at Avanti, a 3-star hotel right across from Ben Thanh Market, and it cost about USD 35/ night. So now you see why I was living like a queen?

WHEN IS THE BEST TIME TO VISIT?

December to April is their dry season, so it’ll be best during one of those months. I went in July and thought the rain quite helped with the heat. Besides, the rain was only occasional so it didn’t really affect the trip much.

IS IT WORTH IT?

The delicious food made the whole trip so worth it. Regardless, I don’t think it’s a city I would dream to come back to. Or actually, I might, if I have more time like 2 weeks to explore other cities or towns to get a complete feel of the country. I heard Hanoi and Hoi An are beautiful.

CAN YOU GO BY YOURSELF WITHOUT A GUIDE?

Yes and no. I went exploring in the city by myself and depended on Google Maps for directions of restaurants and cafes. I also did two pre-booked tours (one-full day tour to Mekong Delta and a half-day tour to Cu Chi Tunnels) with Klook simply because they were really cheap and made the whole journey more convenient. There are public buses that will get you there, but the language was quite a huge barrier for me and I didn’t want to get lost and waste time because I only had the weekend to explore. The full-day Mekong Delta trip cost me USD 14 with lunch, and the half-day Cu Chi Tunnels trip cost USD 13 without lunch.

HOW LONG DO YOU NEED TO EXPLORE EVERYTHING?

To take in everything while relaxing and eating a lot of good food, I think 4 days are enough.

WHAT I THINK OF SAIGON

If you’d ask me to use just one word to describe Saigon, my word of choice would be “chaos”. Things were quite disorganized and it was extremely hard to cross the street. The cars and motorbikes would never stop for you. Even when you’re crossing at the pedestrian crossing, you’ll be waiting forever for them to stop. The rule of crossing in Saigon is Nike’s “just do it”. Do not hesitate or stop half-way, and once you walk, keep walking! 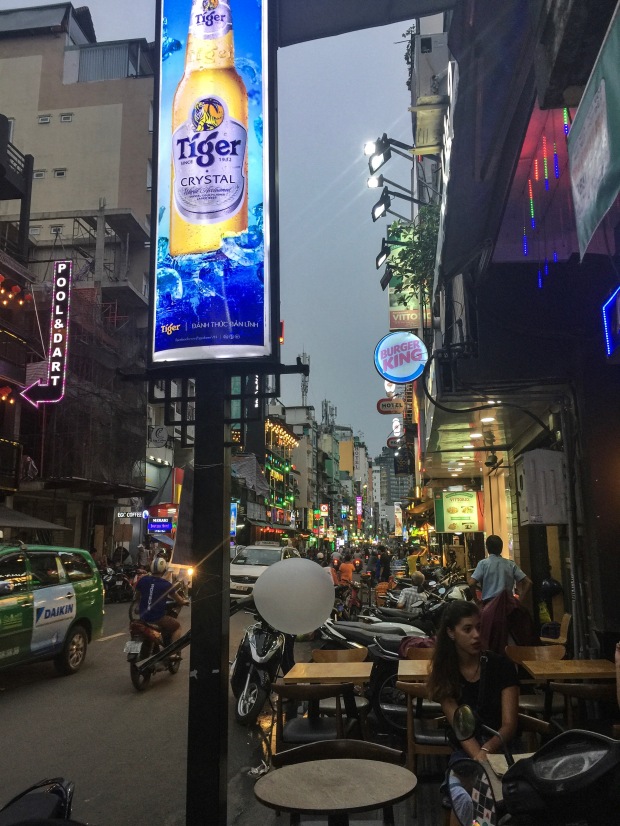 I’ve heard this from many tourists and my local friends in Vietnam but, beware of pickpockets because there are plenty. The locals like to carry backpacks because they’ll be harder to snatch from a moving motorbike. The city is also polluted because there are just too many vehicles. I would even say it’s quite dirty. 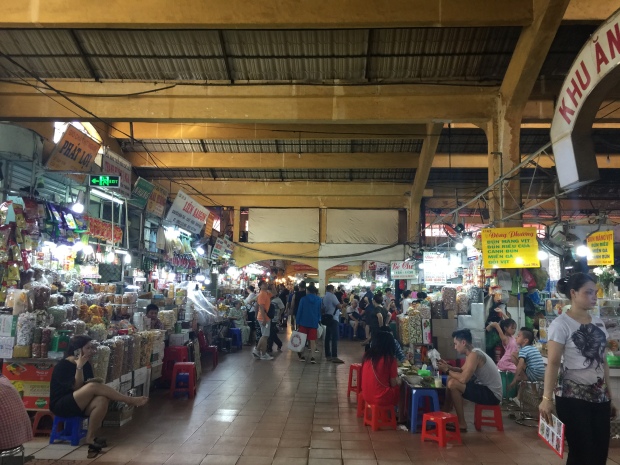 Despite all my complaints, I have to say that the food was absolutely amazing and made up for all the unpleasant things in the city. Sadly I didn’t have enough time to try everything I wanted, but hopefully, I’ll get to come back next time just for a culinary week in Saigon.

This was the one tour I was really looking forward to. Just because I had imagined a full day of boating tour in a kayak while passing through other kayaks that sell food. I was wrong. The tour was quite disappointing because there were some parts of Mekong that smelled like sh*t and the river looked dirty.

Because I had booked my tour from Klook, (it cost USD 14 with lunch included), like any usual tour, we stopped at a few places before going to the Mekong Delta. The tour guide first brought us to An Khanh where we saw the bee master and drank a shot glass of royal honey tea. We then moved to the next place to see the process of making coconut candies with a small kayak (only 5 people can be on it, including the kayak man), not too far away from the bee place. The purpose of these stops was to try selling you stuffs. 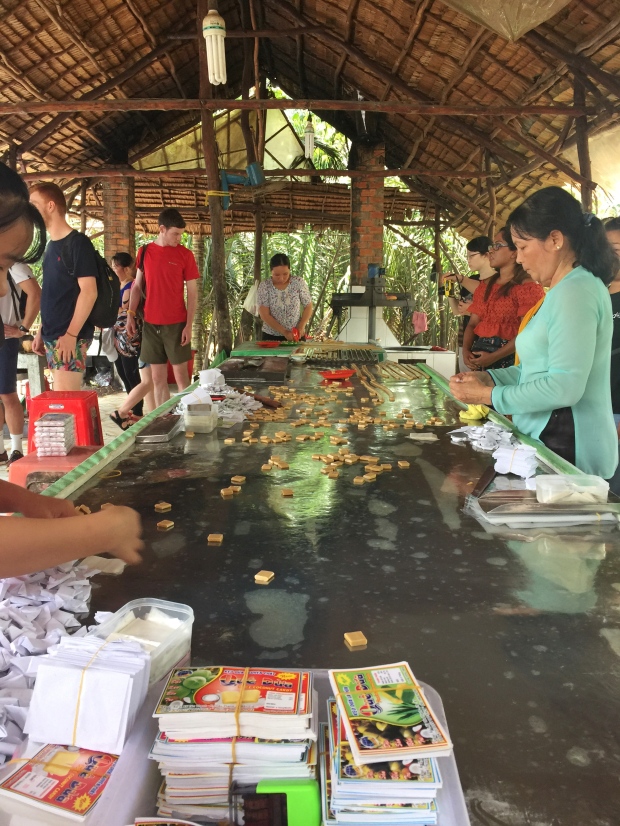 I felt like the Mekong Delta tour should highlight the Mekong River and we should spend most of our time there,  but we only saw the river for a few minutes before and after lunch, and from what you can see from the second picture below, it was nothing impressive. I really liked the 5-minute kayak ride [first picture below] that we did to see the coconut candy, but that was the only highlight of the trip;  my 5 minute of zen. 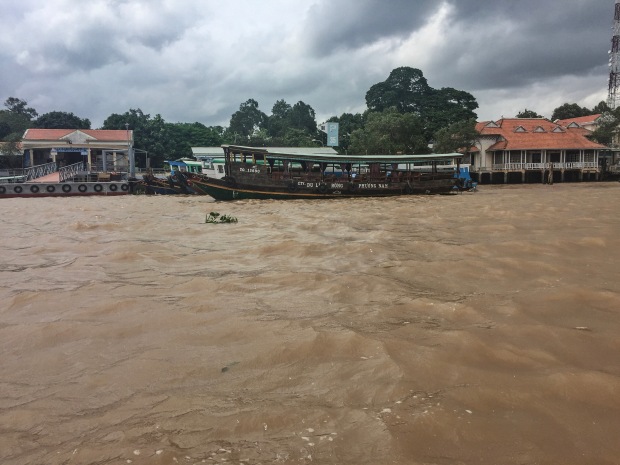 The last stop was the Vinh Trang Pagoda complex where we saw the big Buddha, the reclining Buddha, and temples. I thought this was quite nice, although there was nothing special about it. But at least it’s different from the other stops where people try to sell you something. 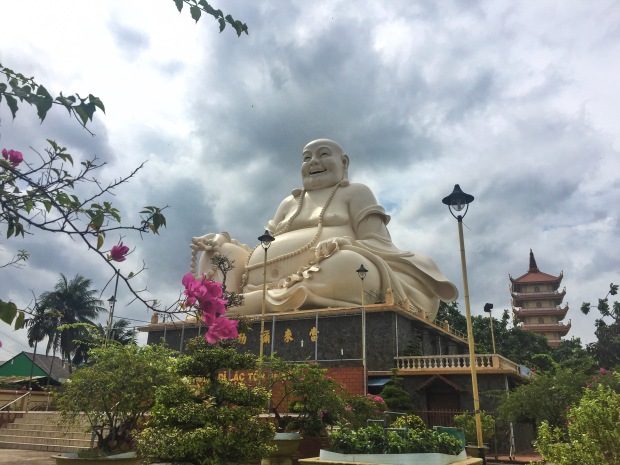 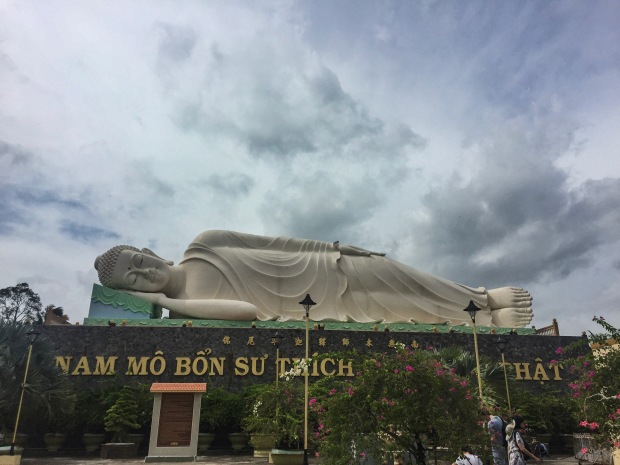 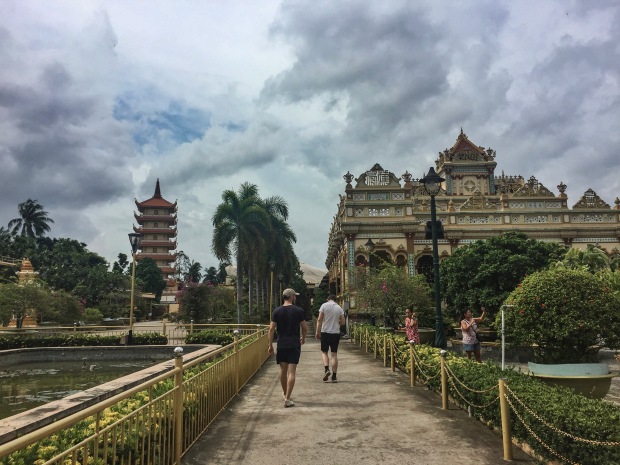 On the way back, we also had one more stop to a big store where they sold Vietnamese coffee, tea, and sweets. Overall, it was a very subpar tour and I wouldn’t recommend it.

The second day was definitely much better than the first. The tour started early too at about 8AM and I also bought my tour package from Klook for USD 13. Similar to the Mekong Delta tour, they took us to a few stops along the way before actually going to the main destination. Cu Chi Tunnels is located in the midst of green jungles so the temperature was cooler inside. BUT, don’t forget to bring bug sprays because Vietnamese mosquitoes are hungry for blood. All over Saigon, whether it’s on the street, or temples, or markets, I was bitten so badly and I learned my lesson the itchy way, so don’t make the same mistakes I did.

I didn’t read up too much history before coming, but I’m sure anyone who sees the tunnels, and how some people live there for 20 years would be impressed. Based on an article from history.com,:

“In order to combat better-supplied American and South Vietnamese forces during the Vietnam War, Communist guerrilla troops known as Viet Cong (VC) dug tens of thousands of miles of tunnels, including an extensive network running underneath the Cu Chi district northwest of Saigon. Soldiers used these underground routes to house troops, transport communications and supplies, lay booby traps and mount surprise attacks, after which they could disappear underground to safety. ”

They were insanely narrow and to think that some people were living and moving through the tunnels to avoid enemies was simply unimaginable. I was claustrophobic so I didn’t actually go inside, but hey I got some pretty cool pictures regardless. 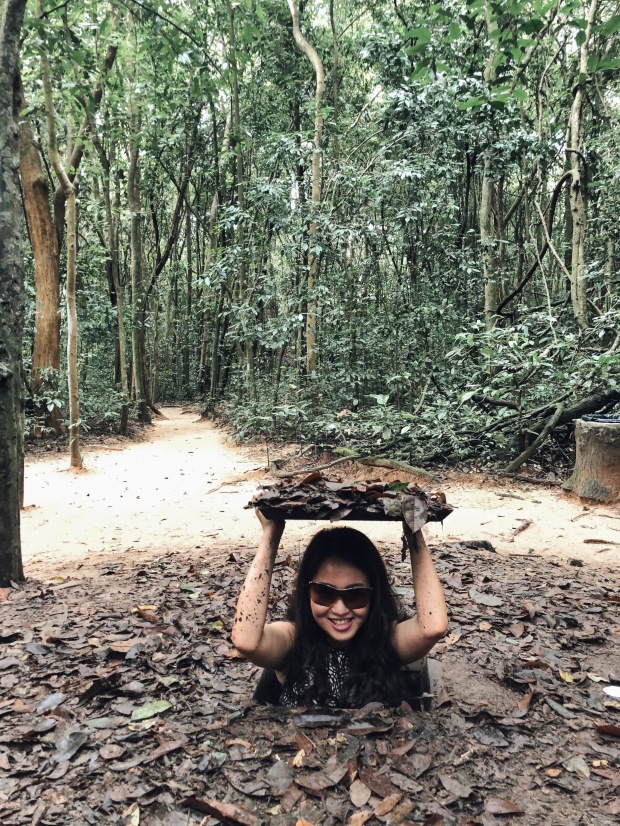 So there you go, everything that I did over the weekend in Saigon. I didn’t have enough time to visit the museum and monuments, but you guys should definitely check them out. I’ll post another article on where I went for food. Trust me, they were SO DAMN FINE.

PS: Apologies for the low pictures quality. I didn’t bring my camera and had everything taken with my iPhone 6.